“This Debate Was a Win for [Sara] Gideon”

Last night, U.S. Senate candidate Sara Gideon won the first debate and showed Mainers exactly what better leadership will look like in the Senate. On issue after issue — from health care to campaign finance reform — Sara showed “a mastery of the facts as she was presenting them,” laying out her vision for putting the interests of Maine people first.

Sara also “made a more pointed argument than Collins did,” holding her accountable for her record of putting special interests ahead of Mainers, and refusing to answer straightforward questions about her support for Donald Trump.

Mainers across the state are praising Sara for her strong performance, coming away from the debate “very impressed” and confident she is “on our side.”

Read more about what Mainers are saying about Sara’s winning debate performance below:

Democrat Sara Gideon sought to link Republican Sen. Susan Collins, of Maine, with President Donald Trump during their first debate Friday night, and she demanded several times that Collins say whether she’ll vote for him — a dare Collins wouldn’t take.

“…Gideon came off as prepared, and she didn’t shy from challenging Collins on a key question of the election: will Collins support Trump?” 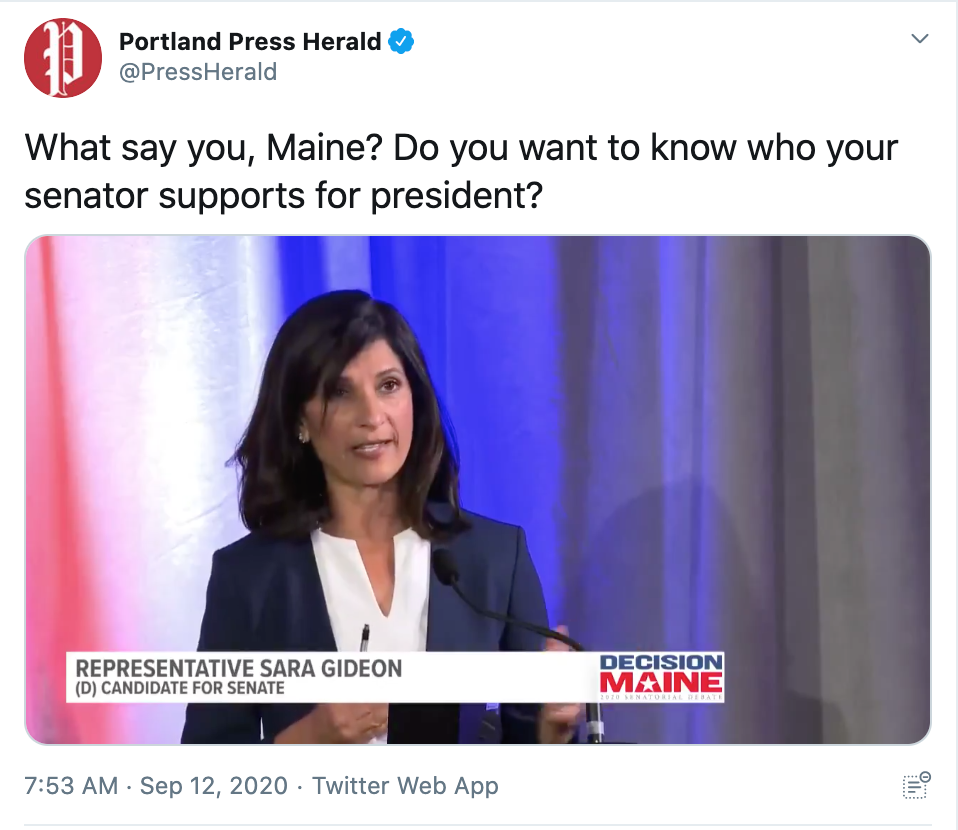 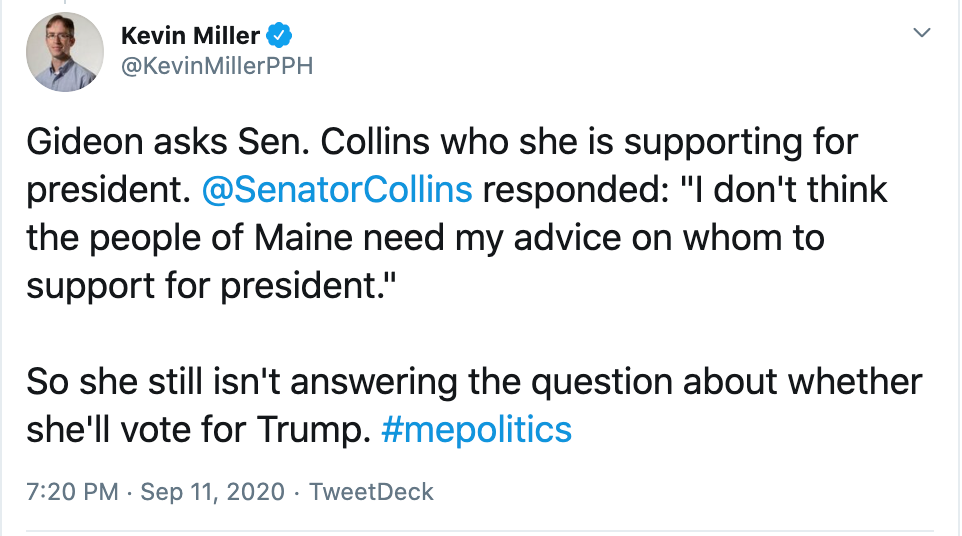 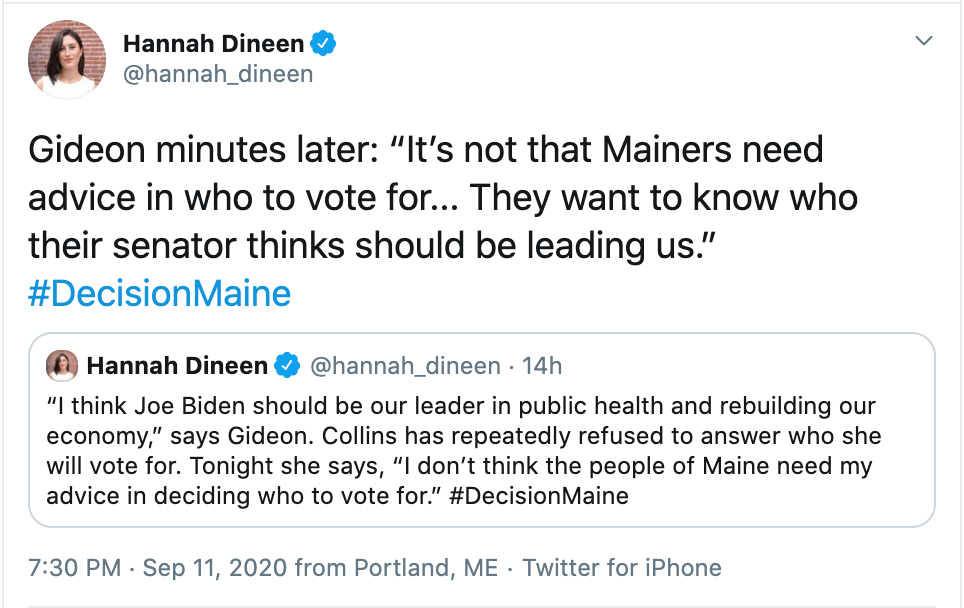 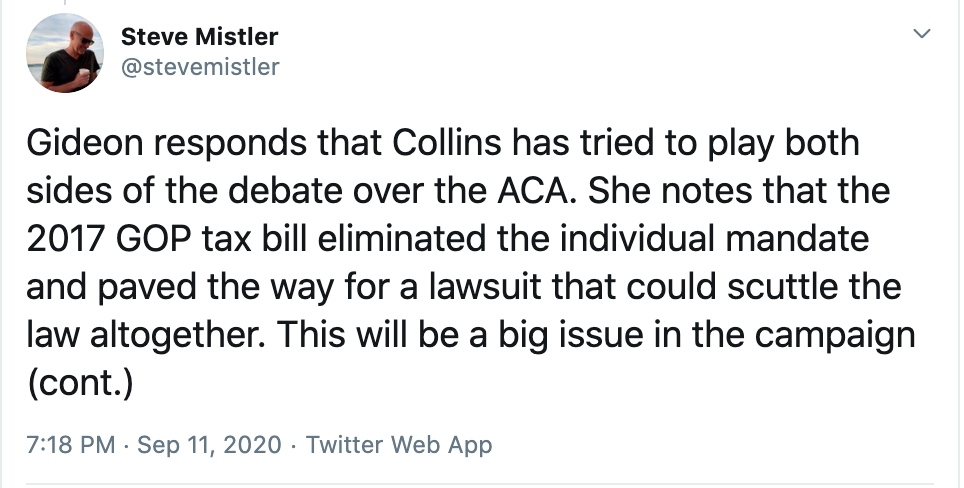 …AND VIEWERS CAME AWAY “VERY IMPRESSED” WITH SARA’S PERFORMANCE

“I came away very impressed with [Sara Gideon]. I thought she did very well, not only in her own movement from issue-to-issue throughout the debate, but also in pushing this central question — which really overhangs this entire race — and that involves President Trump, and more specifically Senator Collins’ refusal to date to do what she did four years ago and tell us how she feels about President Trump going into this election.”

“She has what it takes to go toe-to-toe with Collins, and she really has, what I was looking for […] a kind of gravitas. She brought some seriousness and poise and command of the issues. She was articulate.” [Portland Press Herald post-debate discussion]

“I thought Gideon also […] had a mastery of the facts as she was presenting them, and I thought made a more pointed argument than Collins did.” [Portland Press Herald post-debate discussion] 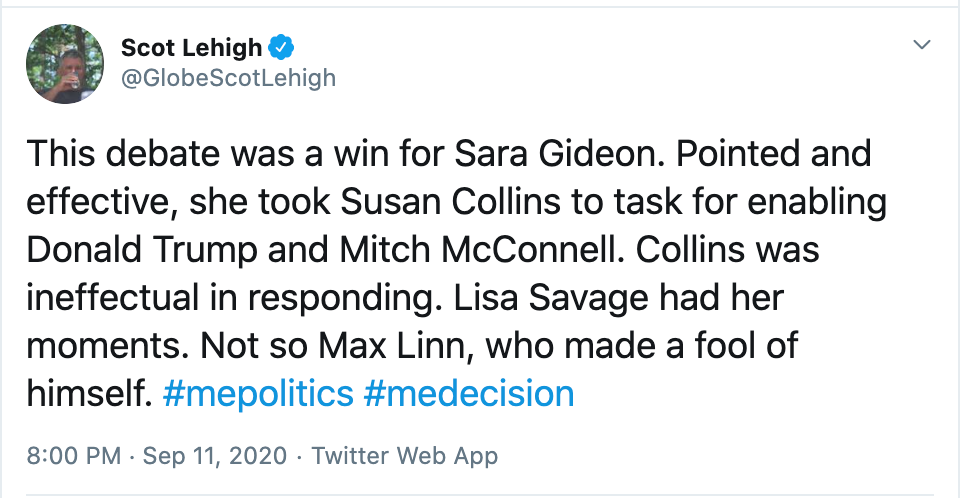 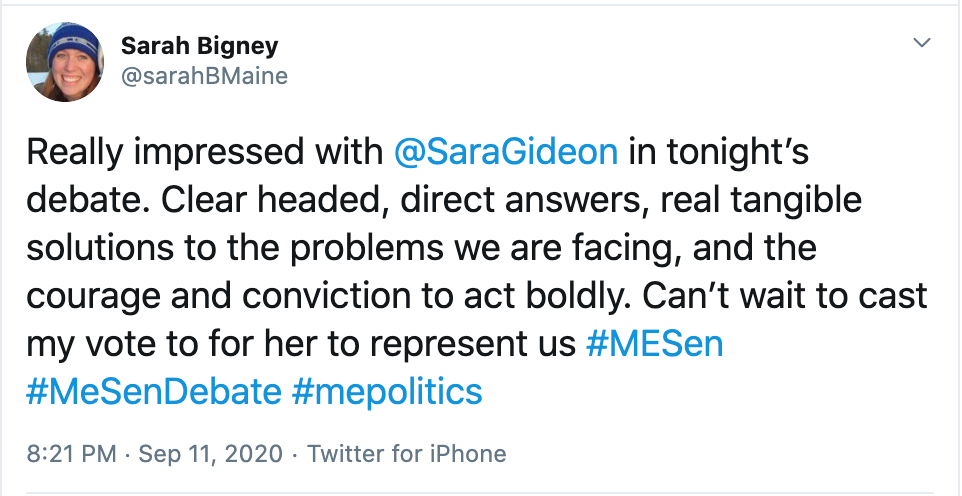 VIDEO: After Donald Trump Lied to the American Public About the Coronavirus, Does Senator Collins Still Think He Learned a Lesson?

Together we’ll elect a senator who will put Maine first.

Our campaign is not funded by large corporate interests — instead, we're powered by lots and lots of people giving small amounts to help Sara defeat Senator Collins. Will you chip in to our campaign today?

*Click any amount to start your donation. If you've saved your payment information with ActBlue Express, your donation will go through immediately.