Biden: ‘I need Sara Gideon in the US Senate’ 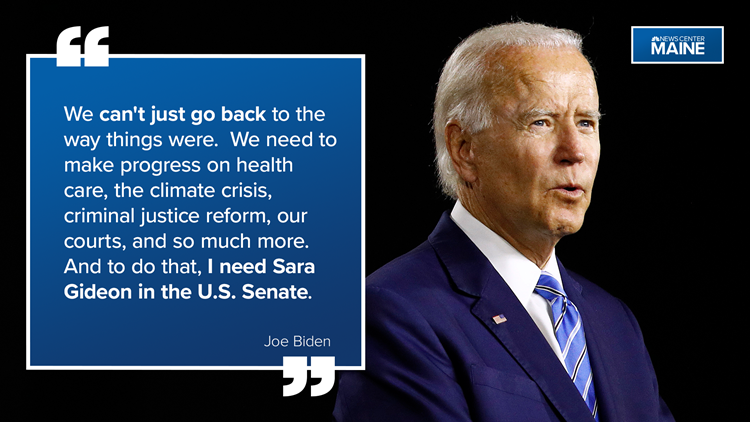 AUGUSTA, Maine — It’s been a busy week for Sara Gideon.

On Tuesday she clinched the Democratic nomination for U.S. Senate; on Wednesday the election already began to heat up as she and Susan Collins clashed over debates, and also nabbed a big endorsement from the Human Rights Campaign; and in the past two days, shes nabbed endorsements from Gov. Janet Mills and former Vice President and Democratic nominee for president Joe Biden.

In the announcement Friday, Biden said, “We can’t just go back to the way things were. We need to make progress on health care, the climate crisis, criminal justice reform, our courts, and so much more. And to do that, I need Sara Gideon in the U.S. Senate.”

Gideon said she’s “so honored” to have Biden’s support in the race.

“The future of our country is at stake in this election, and I’m proud to stand with Joe Biden to win back the White House and flip the Senate in November, Gideon said.

In December, President Donald Trump endorsed Collins in the Senate race, but the endorsement has yet to be reciprocated. Collins has refused to say how she will vote come November but said she would not attack Biden.

In an interview with The New York Times earlier this month, Collins said, “My inclination is just to stay out of the presidential and focus on my own race. As for Biden, she said she knows Biden “very well” from their time serving on the Senate together and it goes against her campaign policy to campaign against her Senate colleagues.

The Mills endorsement on Thursday didn’t come as a surprise, being they’re both Democrats, but it serves as another indicator of the tough battle Collins will face leading up to the General Election.

In the announcement, Mills cited Gideon’s “proven track record of standing up for Maine families no matter what,” and her “leadership on protecting Mainers with pre-existing conditions to passing legislation to lift Maine children and families out of poverty.”

This marks three key endorsements in three days for Gideon. The Human Rights Campaign (HRC) flipped to support her after supporting Collins in every race since 2002.

Kelly said the HRC endorsement “is based purely on partisan politics.”

“The only thing that has changed since 2014 when HRC last endorsed Senator Collins is that she is now the lead Republican sponsor of the Equality Act, HRC’s top policy goal,” Kelley said. “This is not how you treat a friend and ally.”

Together we’ll elect a senator who will put Maine first.

Our campaign is not funded by large corporate interests — instead, we're powered by lots and lots of people giving small amounts to help Sara defeat Senator Collins. Will you chip in to our campaign today?

*Click any amount to start your donation. If you've saved your payment information with ActBlue Express, your donation will go through immediately.